Life after prison: how young people are affected by the criminal justice system 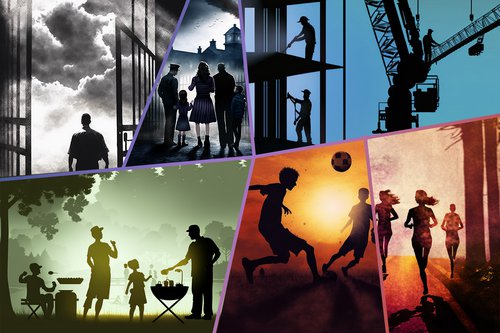 Returning to life outside prison - called reentry - is challenging for individuals and their families. On average, more than half a million people are released from federal and state correctional facilities in the U.S. each year. Stories produced by teenagers are important to understand the far-reaching consequences of incarceration, how everyone is impacted, and what can be done to help families and communities repair.

Ideas for getting started:

A set of moral principles based on standards of right and wrong, usually in terms of obligations, benefits to society, fairness, or specific virtues.

Journalism is the activity of gathering, assessing, creating, and presenting news and information.

Belief that someone or something is reliable, good, honest, effective, etc.

Prejudice in favor of or against one thing, person, or group compared with another, usually in a way considered to be unfair.

An obligation or willingness to accept responsibility or to account for one's actions.

Media refers to all electronic or digital means and print or artistic visuals used to transmit messages.

All forms of media created with the purpose of informing the public and delivering news through specific mediums such as radio and broadcast stations, digital news organizations and others.

The act of consuming any form of media including anything that is text or visual. It can be books, television, papers, flyers, advertisements, newspapers, information on the Internet, etc.

​​A subject or problem that people are thinking and talking about

The condition of having or being composed of differing elements. Especially in the context of the inclusion of people of different races, cultures, etc. in a group or organization

The act or practice of including and accommodating people who have historically been excluded (as because of their race, gender, sexuality, or ability)

Immediate, current information and events are newsworthy because they have just recently occurred. It’s news because it’s “new.”

Local information and events are newsworthy because they affect the people in our community and region. We care more about things that happen “close to home.”

Investigating and explaining, in a critical and clear-eyed way, how people try to solve widely shared problems. Solutions journalism focuses on responses to problems.

Awareness of the elements of environment through physical sensation or intuitive cognition. A capacity for comprehension and understanding.

People are interested in other people. Everyone has something to celebrate and something to complain about. We like unusual stories of people who accomplish amazing feats or handle a life crisis because we can identify with them.

In news, it’s a story’s point or theme. It's the lens through which the producer or writer filters the information they have gathered and focuses it to make it meaningful to viewers or readers.

The people who read, watch and consume news. Often, journalists think about audience and newsworthiness in similar ways. How will the news story serve their local or national audience? Who am I writing the story for and why?

A conversation between two or more people where the purpose is to gather information and facts. The interviewer asks questions and the interviewee provides information based on their knowledge about a specific topic or issue.

A digital audio or video file or recording, usually part of a themed series.

An audio story within a podcast episode

A recording of something going on (versus an interview).

Note: Think b-roll but for audio.

An account of past or current events. In journalism, stories are presented with a combination of people, facts, and typically includes a beginning, middle and end.

A person or other physical being in a narrative. Stories are made up of different characters who provide information and help shape the narrative with their knowledge, experience and perspective.

A group of people with a shared purpose who work to create change together. Movements use power in numbers—be it 5 people or 5,000 people—to bring attention to important issues and create solutions for the future.

The process of changing and updating your work based on feedback with the goal of making it stronger. To successfully revise your story, listen to other perspectives, be open to reconsidering parts of your story and remember not to take feedback personally - it's about the story, not about you.

A description of what your story might be and WHY it’s important. An outline of your story idea and the steps to achieve your goal. A summary of what you hope to accomplish in your story

When violence strikes or when people argue about actions, events, ideas or policies, we care. Conflict and controversy attract our attention by highlighting problems or differences within the community or between groups. Sometimes conflict can be subtle and manifest as tension.

The term “empathy” is used to describe a wide range of experiences. A generally definition is the ability to sense other people’s emotions, coupled with the ability to imagine what someone else might be thinking or feeling. In media-making, creators can have empathy for their subjects and the audience can empathize with the characters.

The story of one person, has voiceover (VO), b-roll, pictures, nats (natural sound), interviews of family members or peers of that one person.

When a television reporter appears in front of the camera to narrate part of a story – most often at the beginning to set up the story, in the middle as a transition or if there is no good b-roll to cover voiceover, or at the very end.

Narration done by a broadcast reporter, usually reading from a script. The reporter's voice is recorded over a sequence of video clips that tell a story.

A document with the details of each shot of the scene or action sequence you plan to record. It contains the Shot Number, Composition/Angle, and Description.

Generally considered to be audio captured from an individual who is on camera, like an interviewee and may also be referred to as a soundbite.

Commonly used as an establishing shot.

Full shot of the person or location. Full body.

Half body, normally from the waist up.

Close Up of the face including neck and shoulders in the shot. Also used for objects.

Shows parts of a person or object in detail.

Shows a person’s back of head and shoulder looking at someone or something.

A short extract or clip from a recorded interview, chosen for its relevance to the story, pungency or appropriateness.

The primary video and audio that drives your story from beginning to end.

A selection of separate sections of video that form a continuous, edited piece.

A short video clip that captures the interview subject in their natural state. It involves a person looking into the lens for a few seconds. It’s like a still photo but video!

A person who has a comprehensive and authoritative knowledge of or skill in a particular area.

Something that is known or proved to be true.

Something that is accepted as true or as certain to happen, without proof.

An investigation into and study of sources in order to establish facts and reach new conclusions.

A source is an individual, company, document or more that can provide information to fuel a new story. In order for a story to be considered verified and to maintain a reputation as a news outlet, it is important to have a credible source.

Sounds produced in their actual setting. Natural sound, commonly known as NAT sound, puts the viewer in the place the story was told by enhancing the scene(s) with video containing rich audio such as a musician singing at a train station, a storm approaching, or the sound of a tractor plowing the field.

A person who gives an account or tells the story of events, experiences, etc. In news, it is the person who adds spoken commentary to the video news story.